Why And How To Eat A Pomegranate 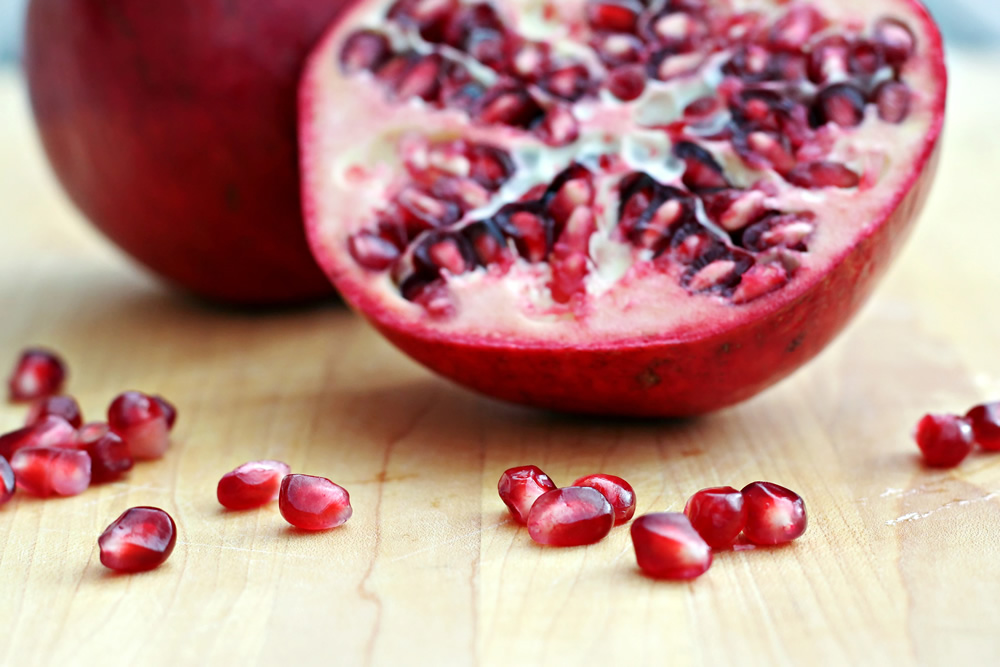 December 2, 2014
Pomegranates are absolutely loaded with powerful nutrients. They?ve got a resume, thousands of years long, on rockin? the health world. But how on earth do we eat them?! Learn how?and enjoy.

And welcome to the pomegranate fan club. The pomegranate is a superfood (insert trumpets blaring) with a long and rich history. We love superfoods and all of their caped amazingness! Native to the East (as in eastern Asia), it can be traced through historical documents as far back as 4000 B.C. Holy long resume, Batman?that?s over 6,000 years!

The almighty pomegranate has been named in many ancient texts from the Book of Exodus in the Torah, the Quran, the Homeric Hymns, and Mesopotamian records, to name a few. Heck, this Caped Avenger of Health (pomegranate) was found (carbonized) in the tombs of Ancient Egypt, including King Tut?s. It was celebrated by the Buddha, and was considered one of the three blessed fruits, often being represented in Buddhist art. And, even more impressive, it has a solid place in my Food Sass? Club. J

I could go on, but that?s probably more about pomegranate history than you ever wanted. Just know that pomegranate has been recognized as a superfood forEVER. More than just a nutritious food source, the pomegranate was an integral part of many cultures, becoming part of the lore and legends of a culture. Because pomegranates ROCK.

And guess when it tends to become available in markets in this millennium? December! Yaaaaay!!

So, what?s so great about this simple fruit that makes it a rock star with staying power? India’s Ayurvedic medicine has used pomegranates as a source for many traditional remedies for thousands of years. For example, the bark of the tree and the fruit rind is used to stem diarrhea, dysentery, bladder problems, mouth ulcers, and intestinal parasites while the seeds and juice are considered a tonic for the heart.

The seeds in their casings, or arils, are the most desired part of the pomegranate, and they are consumed raw. YUM! Pomegranates are rich in vitamin C, pantothenic acid (vitamin B5), potassium, and the almighty polyphenols. ?Polyphenols? means antioxidant power for your body, and we all need plenty of THAT. These important polyphenols, of which there are many varieties in pomegranates, slow aging, protect against (and even reverse) heart disease, and protect us from cancer. One study showed it decreasing arterial plaques by 30%! Thank you, pomegranate?you sweet friend (literally and figuratively)!

The pomegranate also has unsaturated oils, fiber, and many additional micronutrients, if you eat the seeds (which I encourage!). Current research underway includes studies on how pomegranate components affect diseases such as diabetes, cancer, rhinovirus, the common cold, coronary artery disease, kidney disease, and brain injury.

How the heck does one eat them?!

Eating them is much more simple than you may imagine. Simply cut the fruit into halves or quarters and serve them up! My experience is that kids delight in the bright color and the process of picking out the arils (fruit-covered seeds), which are clustered in a honey- comb fashion inside the fruit. It ends up being a social activity that invites conversation and lip-smacking while deeply nourishing your body. My youngest said, during his first ?pomegranate experience? (I served it as dessert), ?this is so COOL…it looks like a beehive!?

You can also use pomegranate in juicing, which I highly recommend. And they taste uber-yummy, too. As many of you know, that?s my favorite combo…nutritious and delicious!

The food you eat builds your body, every day, for better or for worse.? Make choices for health!