The mindset of good enough 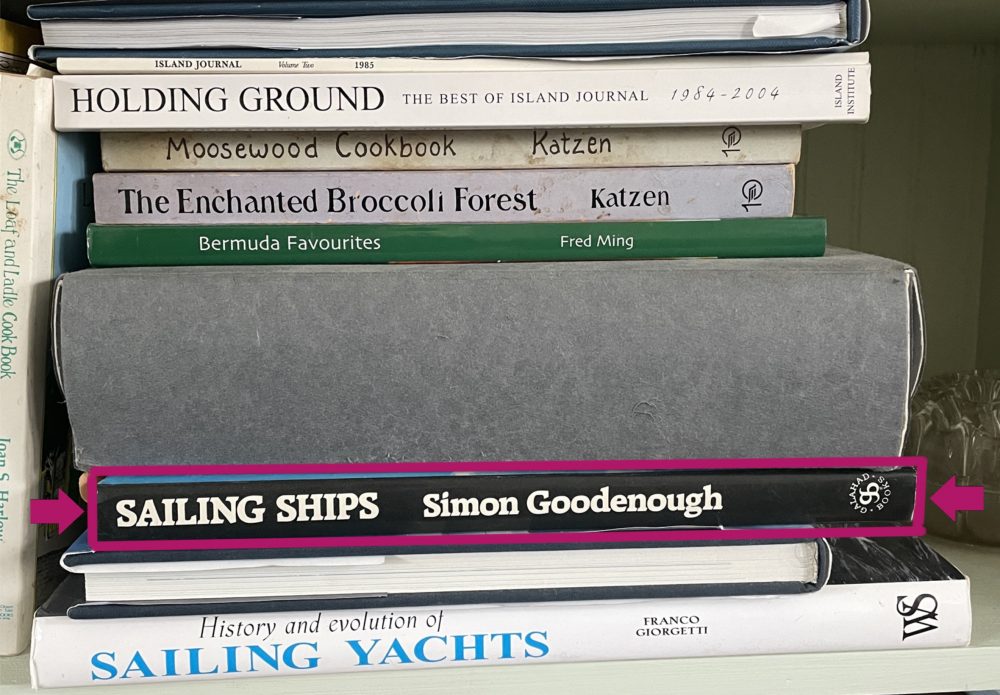 May 4, 2022
Most of our beliefs are programmed FOR US, before we turn 7. And are left unexamined. Today, we turn the tables and embrace Good Enough.

Good enough. SAILING SHIPS by Simon Goodenough was the book spine that caught my eye.

I was recently visiting a family member who is an avid fan of sailing, gardening and functional health. I’ve walked past this bookshelf many times, but on this day Mr. Goodenough’s book stood out.

What a BOSS last name! “Hi! I’m Laurie Goodenough.” I’M good enough. What’s it feel like to say those three words, out loud, to yourself? Aside from the fact that you’re talking to yourself. Which I don’t know why talking to ourselves gets such a bad rap. Anyhoo.

Good enough. Words that, when embraced and lived, can be transformative for happiness, stress, relationships and health. Unfortunately, for many folks, saying “good enough” to themselves feels uncomfortable. Because they don’t really believe it.

Why might not you believe it? Because you’ve likely received decades of “data” to the contrary from media, friends, family, bosses, clergy, neighbors, coworkers and the impatient cashier at your local coffee shop.

The “data” might sound like these samples:
Nice girls aren’t bossy like that. Big boys don’t cry. Jake is prom king because, unlike you, he’s athletic and handsome and popular. You didn’t get into that college because you’ve never been much of a student. You’re so emotional and you’re a complete drain on the whole family. With that haircut, you’ll never get a girlfriend. You’re terrible with money. I’m not driving with you; you’re a terrible driver. I’m nicer to you sister because she’s not bitchy all the time. I left you because you’re just not attractive anymore. I get this angry because you’re such a pain in the *ss; you make people lose their temper. Gretchen got the promotion because she’s got more brains. You have a huge *ss; I could put my drink on that thing.

Is this accurate and reliable data? Maybe. But likely not.

Data is simply pieces of alleged information. The accuracy of that data is a completely different topic. There’s accurate data and inaccurate data. Sometimes data is accurate at one time and then becomes inaccurate.

If there’s one thing that’s true about human beings, it’s that we’re constantly in flux. On every level. Our emotions change. Our ability to navigate those emotions change. Our mind changes. All the time! Our brain changes. (Hello, neuroplasticity!) Our body is a different organism, second by second. Relationships change. Flux, flux, flux, I say.

So let’s say that you were a terrible driver when you were 16. That doesn’t mean you are still terrible when you’re 18 or 30 or 53. Good enough at any age.

It’s plausible that your haircut DID look weirdo-pants to your mom. But some edgy young gal would’ve thought you were the cat’s meow. She was dying to go out with you if only you’d had the confidence to meet her welcoming smile. You were more than good enough to her!

Lots of young people don’t manage money well. Money management is a learned skill and we can improve our financial savvy, at any age. Good enough, for the taking.

“Data” is in flux and can be quite subjective. It most often comes through the filter of another person’s mental/emotional self. Bad news is that most of our internal belief systems are programmed for us, by the time we’re six years old. Once we latch our young minds onto a piece of “data” that we’ve been assigned, the Creature Double Feature begins.

So how does this whole insidious, slimy, not-good-enough baloney take root in our psyche? Well, there’s whole books about that, so we’re going to focus on the main two facets. The Creature Double Feature of not-good-enough.

Most often when someone is telling you that you’re not enough, it’s directly related to their OWN feelings of unworthiness. Very little to do with you, actually. The term for this is projection.

Projection is when we unconsciously take the traits, behaviors and emotions that we don’t like about ourselves and attribute them to someone else. So if I feel ugly, I tell my daughter or son that they’re ugly. If I feel like a loser, I tell my spouse that they’re a loser.

Projection is worth looking into and a real game-changer for growth, for two reasons:

We can’t be good at everything for Pete’s sake. So maybe you’re not so great with money but really great with kindness or art or making hubcaps. You can stick to what you’re good at and hire someone else to do the money part. Or you can take classes at the local high school or community college and get better with money. Not Rockefeller. Just better. Good enough.

Perfectionism serves no purpose except to make us dislike ourselves, feel stressed out and be constantly competing to prove our worth. DRAGola.

Perfection is a myth and chasing it will make you unhappy. We think that when we get to perfection, then we’ll at last be happy and feel accepted—by ourselves and others. We’ll finally feel worthwhile….(none of this is attained via the pursuit of perfection)…

Releasing the idea of perfection doesn’t mean that you can’t have goals and aspirations to move toward. We all do. It’s simply an adjustment of how we move toward them—our inner approach—and our expectations of ourselves while we do it.

We’re not perfect AND we’re good enough. At the same time. And we rock on. We leave the movie theatre showing the Creature Double Feature and rewrite the screenplay.

Rewrite the screenplay to good enough

Self-improvement, going after your dreams, and embodying your best self. These are pursuits that are 100% compatible with Good Enough. “I’m good enough right now AND I’ll continue to manifest [pursuit of choice].” Good Enough doesn’t mean “who cares.” Not at all. Instead, good enough means:

“I love and accept myself exactly the way I am. I don’t need to be perfect to be happy, to love and be loved, to make a difference in the world, or to experience health and joy. From this place of acceptance, I may choose to move toward different mindsets, goals and ways-of-being that I believe will support me in living my most authentic and joyful life. The current me is good enough and future iterations of me will be good enough too.”

I invite you to rewrite the screenplay, and entitle it, “Me: Goodenough.” Just like Simon that sails ships bearing his boss last name.

To your empowered well-being,
Laurie