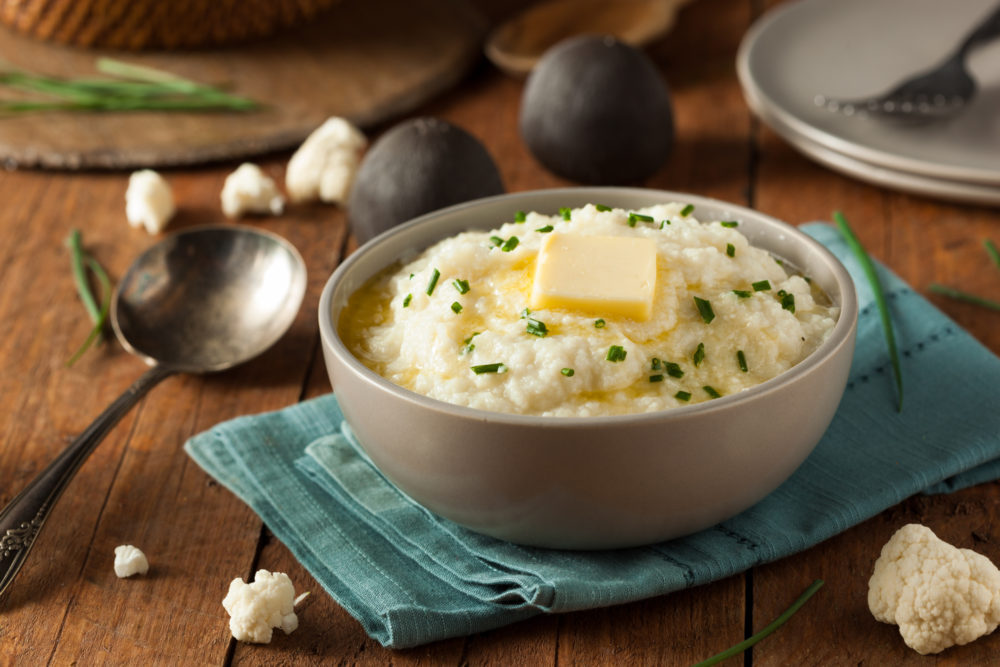 November 7, 2016
"Go big or go home" isn't always the best approach. Often with food and health, slow & steady wins the race, and today's post will provide food for thought and food for your Thanksgiving table!

In a few weeks we’ll be enjoying the U.S. tradition of Thanksgiving. Mashed potatoes tend to be a perennial fave for this holiday, and although smashers (our family word for mashed potatoes) are a wonderful comfort food, they have a few drawbacks.

White potatoes certainly aren’t an evil food. Potatoes are, after all, a happy root from nature. Unfortunately, they’re also short on nutrients and long on carbs, placing them in the empty carb category. And, to add insult to injury, most of us (myself included) tend to eat a mountain of smashers, instead of a modest serving. They’re one of those foods I call avalanche foods—we start out with a little and then just keep on going. It’s hard to stop.

One of the things I’ve learned from years of work in nutrition and functional medicine is this: small things are big things. Of course, I could get all philosophical on ya and say that applies to more than food & nutrition, but we did a Soul Food edition last week. This week is all about FOOD SASS®. 🙂

Here’s an example. One of the interesting situations that I end up in sometimes is that someone makes an appointment with me who has no interest in talking to me.

They make an appointment with me, or an appointment gets made FOR them, via a well-meaning spouse, parent, or adult child. Then they come to me, all disgruntledly, pretty sure they’re going to hate everything I say. Which I totally get. I don’t know anyone that enjoys a mandate!

One gentleman that came to see me was pretty clear about his disgruntledness. Dan’s visit was a mandate from his wife, who was alarmed at his increasing weight and decreasing health. He was pretty irate with the whole situation, which now included me. But I had an idea that I thought just may make everyone happy?

Long story short, I made a deal with Dan (way better than making a deal with the devil!). We agreed that I would let him bail from the remainder of the appointment that he wasn’t into, if he could commit to ONE change. And then he could tell his wife, and I’d have his back, that that was the only thing he needed to change. Yikes, talk about pressure. Which thing to pick?!? His Food Journal was, um, not very Food Sass®-ish.

I advised him to cut out his morning OJ. I knew his insulin system was getting hammered, and that removing OJ (pure sugar) first thing in the morning was probably my best shot at helping him, given the slim paremeters I had in which to make a differrence. He agreed. We said adieu and I was pretty sure I’d never hear from him again. Like, he practically RAN out of my office.

Ten months later, I get an email from DAN (not his wife!), saying that he’d lost 17 pounds. SEVENTEEN POUNDS. Small things are big things. This is why small, mindful changes, committed to over time, make a lifetime of difference, as opposed to a big, flashy restrictive diet that you go on, then go off, so you can lose 17 pounds and then gain it all back. Bummer.

So, maybe this Thanksgiving, instead of cooking up classic smashers for Thanksgiving, you try MASHED CAULIFLOWER. Super yummy and goes great with turkey (or ham or beef or?). Cauliflower is a nutritional powerhouse and is what I refer to as Smart Carbs (as opposed to Empty Carbs). Then maybe you love it so much that it becomes a regular dish in your meal lineup. Small things are big things!

For those of you engaged in a pre-holiday Body Sass® Cleanse, this recipe is cleanse-friendly!
Enjoy.